or 6 weekly interest-free payments from £0.58 with

Element Klik Klak Disposable Vape is unique and one of a kind. Say hello to the next generation disposable vape pods which can transform into a 1200 puff disposable in a totally legal form in the UK for a 1200 puff!

The Klik Klak Disposable Vape by Element is a fantastic new innovation to say the least. Each Klik Klak disposable vape pen has magnets along the sides- it can be “clicked” together with another Klik Klak. The mouthpieces of each device sit flush next to each other, and then the two devices can be vaped as one to create a blend of flavours. With 10 flavours available at present, there are a whopping 55 total combinations! 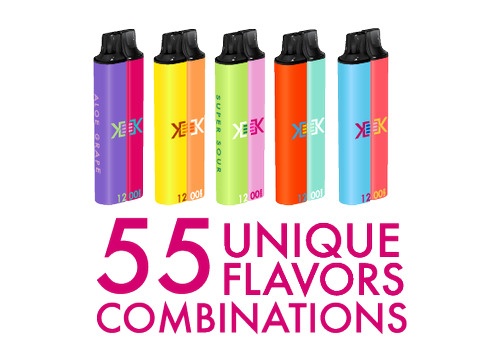 Imagine that 55 flavour combinations for you to try with 10 different base flavours. Will this be a new gimmick that will simply fall off or will this be the new way the disposable vape market goes to provide even more choice to the end user. We believe it will be the latter as the quality of the juices are simply outstanding!

A smooth and fragrant hit of bittersweet aloe blended into handfuls of freshly picked grapes from the vineyard.

A jam-packed disposable with mouth-wateringly sour blueberries and raspberries from inhale to exhale.

A refreshingly cool ice flavour profile that is classically executed with every single puff.

This flavour packs a powerful fruity punch with every single hit, combining the freshest exotic fruits together for a truly tropical vape.

A sharp and tangy pineapple flavour from inhale to exhale, creating a heavenly exotic fruit vape.

Sour fans get on this one! A tongue-twisting mixed fruit flavour profile vape after vape.

Element have captured the true flavour of mixed tropical fruits from paradise and squeezed them into this disposable providing bursts of flavour.

Oozing with flavour from inhale to exhale with a fresh and juicy watermelon flavour that cleanses the palate hit after hit. 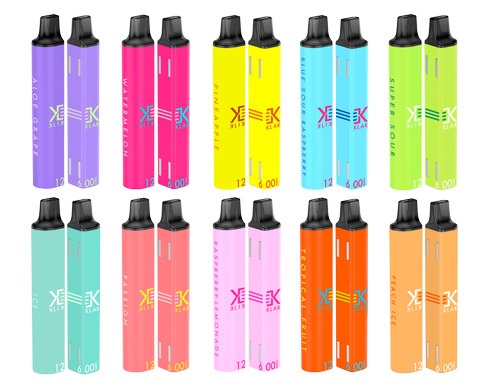 Who are Element E-liquid?

Element E-liquids are a massive brand that have come over from the USA and have been in the vape scene for many years. Known for their attention to flavour, quality and pure pleasure. Their e-liquids have been a familiar product for many vapers and now they have decided to embrace the disposable market.

Each individual Klik Klak has up to 600 puffs when combining two devices this gives you the 1200 puffs. The beauty is not only in the number of puffs but the ability to switch flavour combinations to suit your vaping style. We all know vaping the same flavour can get boring, well the Klik Klak certainly shakes things up literally!

Is there a set flavour combination I have to stick to or can I choose as I wish?

There is no set combination of which flavours you should pair. Every vaper is unique and therefore every flavour combination is unique to each vaper. Our first combination was the Passion and Pineapple and we have to say it was immense! Definitely worthy of a purchase as you will come back for more.

Added to wishlistRemoved from wishlist 2
- 28%
All Products

£8.99
Add to basket
Added to wishlistRemoved from wishlist 15
Sale!
Brands

£4.99
Select options
Added to wishlistRemoved from wishlist 5
Sale!
All Products

£9.99
Select options
Added to wishlistRemoved from wishlist 1
- 20%
All Products

£9.99
Add to basket
Added to wishlistRemoved from wishlist 3
- 31%
All Products